More details on the royal wedding between Prince Harry and Meghan Markle are expected to be revealed later.
Clarence House announced on Monday that the couple were engaged and planning to marry in spring, but no details of the ceremony or specific date were given.
In their first joint TV interview, the prince said "beautiful" Ms Markle "just tripped and fell into my life".
And the fifth in line to the throne revealed he proposed to the American actress as they made roast chicken.
'Incredibly happy'
The announcement, which was issued by Clarence House, the Prince of Wales and Duchess of Cornwall's official residence, said details about the wedding day would be unveiled "in due course".
However, the Archbishop of Canterbury has indicated the couple will have a church wedding, saying the pair had "chosen to make their vows to God" in a religious ceremony.
And royal watchers have mooted that the date of the wedding is unlikely to be in April, as Prince Harry's sister-in-law the Duchess of Cambridge is expecting her third child around that month.
Harry: Stars were aligned when I met Meghan
The prince and the actress
Who is Meghan Markle?
Profile: Prince Harry
After news of the engagement was released, a Buckingham Palace spokesman said the Queen and Duke of Edinburgh were "delighted for the couple and wish them every happiness".
Prince Charles also said he was "thrilled", while Ms Markle's parents, Thomas Markle and Doria Ragland, said they were "incredibly happy".
Prince Harry's brother Prince William and Catherine, Duchess of Cambridge, who were married at Westminster Abbey in 2011, said they were "very excited for Harry and Meghan".
'Very romantic'
On Monday, Prince Harry revealed he proposed earlier this month during a "standard, typical night for us" at his home in Kensington Palace.

Kindle Customer Support
Prince Harry and Meghan Markle
"It was just an amazing surprise. It was so sweet, and natural and very romantic. He got on one knee," Ms Markle said.
Prince Harry said: "She didn't even let me finish. She said, 'Can I say yes.'
"Then there were hugs and I had the ring in my finger.
"I said, 'Can I give you the ring?' She said: 'Oh, yes, the ring.' It was a really nice moment. Just the two of us."
Turning to Ms Markle, Prince Harry said: "And I think I managed to catch you by surprise as well." 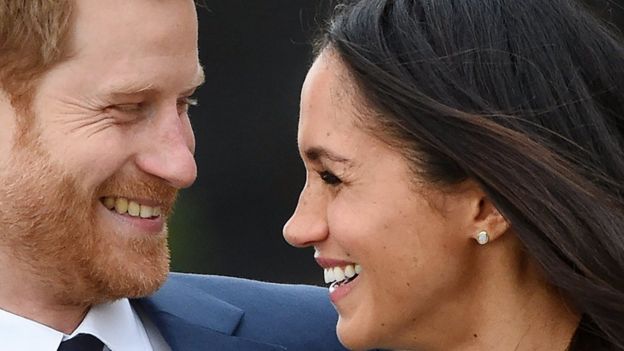